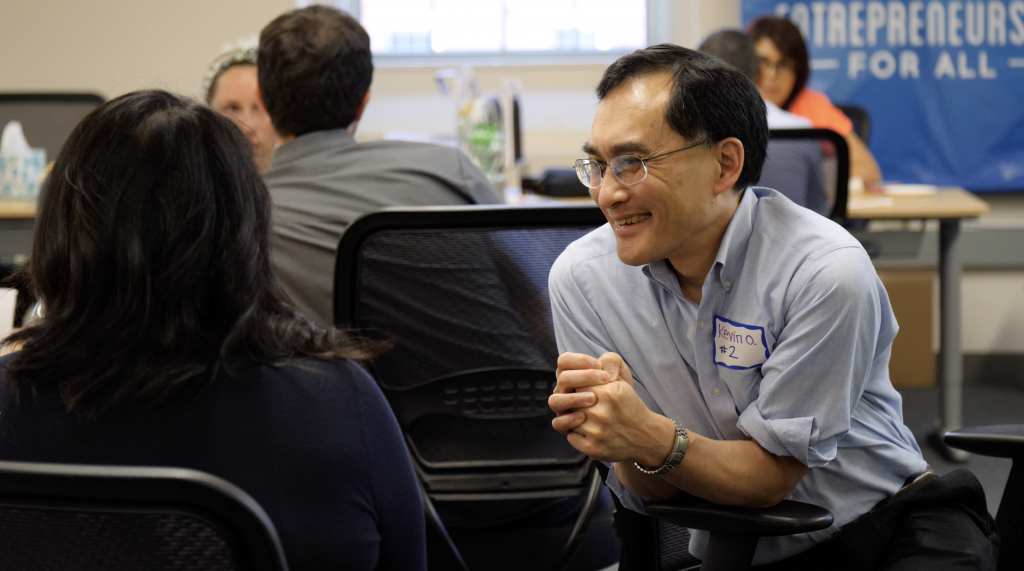 Kevin Oye has been a Mentor and Specialist with EforAll’s Lowell program for the past six years. This is his story.

How did you first hear about EforAll?
“I was the Vice President of Systems and Technology at Sycamore Networks, Inc. founded by Desh Deshpande. When it was announced that Desh Deshpande was providing the initial funding to create what would ultimately become Entrepreneurship for All, I jumped at the opportunity to be a Mentor and give back.”

How would you describe being a Mentor?
“It’s an absolute blast! I get to watch entrepreneurs discover themselves, cheer them on when they’re successful, and watch them build their confidence.”

What initially inspired you to give back?
“I’ve always felt incredibly lucky that I didn’t have the struggles my parents faced. As Japanese Americans on the West Coast during World War II, they were not always welcomed. Both families were swept up in President Roosevelt’s executive order requiring all people with Japanese ancestry on the West Coast, including U.S. citizens, to be removed from their homes and placed in internment camps. Yet even after World War II, when they were not allowed to return to their West Coast homes, they never complained.  When they were allowed to leave the camps for the East Coast, they received help from the American Friends Service Committee, the Quakers, in Philadelphia, who welcomed them and helped them find housing and resettle in the Philadelphia area where they rebuilt their lives. Ultimately, giving back is the reason we’re living in this world, as you realize how interdependent we all are. It’s a beautiful thing, it’s a humbling thing.”

You are also a Professor at Tufts University. Is that another way that you give back?
“I’m so thankful for the anonymous people who gave me a full scholarship to go to college. Now that I am teaching at Tufts, I get to give back to that community and hopefully inspire another generation of students to do good in the world.”

How do you approach mentoring an Entrepreneur?
“I’m a big fan of asking questions. I get into listening mode and really enjoy learning about the vision an entrepreneur has for their business and their big why.”

What is your favorite part of being a Mentor?
“It’s watching that light bulb moment when an entrepreneur is no longer looking for validation, they simply have an idea and can see the opportunity to advance it.”

What makes a good Mentor?
“You need a mindset that is curious about learning, and you need to have empathy towards an entrepreneur and their journey.”

Can you give us some highlights of Entrepreneurs you’ve worked with at EforAll?
“Karl Borne of True Cyclery, he always had the itch to do something on his own and build a business around his own passion, and he’s making a living out of it! Laurin Mills of the Dinner Daily, had a passion for wanting to build a strong team and bring the Dinner Daily to scale and she’s doing it! Nareth Muong started the Cambodian Language Translation service at the Cambodian Mutual Assistance Association and was cash-flow positive from day one.”

How do you manage your time in your daily life?
“There are only so many hours in the day. My three principles are:

What advice do you have for entrepreneurs?
“To thine own self be true.” William Shakespeare